I’m always amazed and touched when we shoot an episode of English Weirdness. The efforts and dedication of our small band of volunteer ‘Weirdos’, almost all of whom have precisely zero experience with film-making, are unfailingly impressive.

Over the past weekend however, these efforts assumed new heights when we did a marathon four-day shoot of three new episodes. Our plan was to maximize our shooting budget by hammering out three full episodes worth of material in one stretch. It sounded good on paper.

Beginning on Friday afternoon, working well past midnight, then onto Saturday morning until after midnight again, the same on Sunday, and then onto Monday. Monday of course, we all had school; the students needed to get their tired butts into class, and I of course, had to teach. Then came 4pm. That’s when we began shooting our special Halloween episode 8. We shot and shot, deep into the night, until Uriel and I made the decision to act responsibly and wrap the shoot. It had become clear that our team was exhausted, our performers getting incoherent, and with my own cognitive capacities fading, things like safety and health had to take priority.

So we got two full episodes completed over the weekend and half of episode 8 done on the Monday night. Wrapping the shoot and striking the camp halfway was certainly the responsible choice, but I did feel somewhat disappointed and frustrated for the team, who had already given so much of their time and effort.

In the end, we opted to schedule one more day in a couple weeks to complete episode 8. This involves calling the team back in for another day of effort, which I know is asking a lot. But, in true Weirdo fashion, everyone agreed and seemed ready to go for it. As ever, Team Weirdo remained singularly dedicated to producing this series. What this says about the series or me, I can’t say. But it says a hell of a lot about these young Weirdos, their willingness to get involved in an unusual and challenging project for which there are no immediate rewards, other than some decent pizza (in lieu of pay!).

All I can say, to each and everyone of you hammering Weirdos, is THANK YOU. I am forever grateful for knowing you and being your teacher.

Liked it? Take a second to support English Weirdness on Patreon! 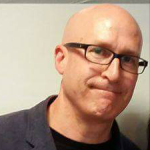